This trip has been full of bobbleheads – otherwise known as children under the age of 5. Our circle of friends must have taken notes from the rabbit handbook, because procreation has happened en masse. This is just fine with me – I dig a good bobblehead. In spite of their limited impulse/bladder control, they got their priorities right: eating and sleeping are my favourite activities, too. Here are a few of the little dudes’n’dudettes we hung out with before Todd left to go back to Bangkok last week (I’m livin’ large and in charge in Canada until early August): 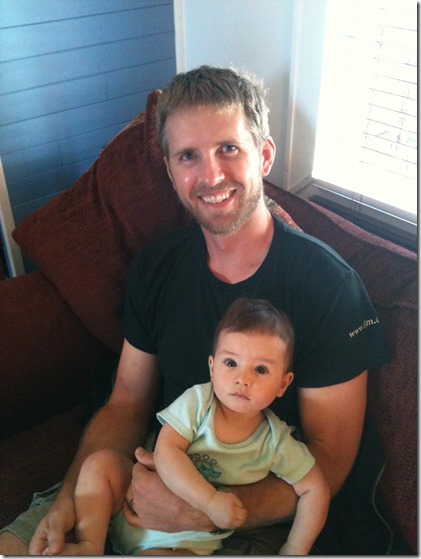 As you can see, Theo is one gorgeous little dude. While I guess his parents may have had something to do with his genetic makeup, I attribute his good looks mostly to the fact that he was born in our house. That’s right: our frenants (friends/tenants) Eric and Laura decided that our little love shack would give their birth experience that certain extra somethin’ somethin.’ Clearly, it worked out. I generously offered to let them pay their rent using Theo as the currency, but they were strangely disinterested… 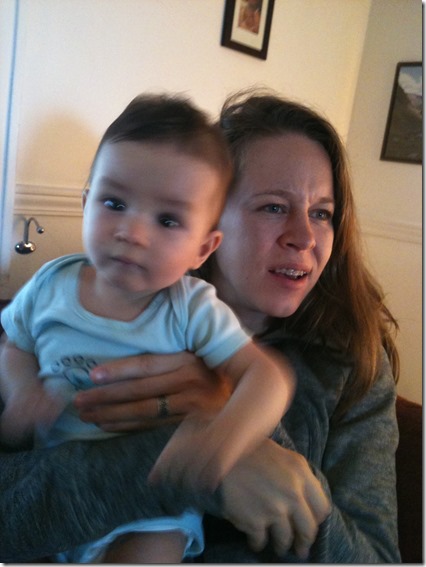 **If you’d like to birth your child in the Abode of Attractiveness, contact us – we are currently offering sweet package deals. Beautiful Babies guaranteed. **

2. Next up, we have my favourite twins/goddaughters Bobble and Yoda. We have known these two pixies since birth, which is probably why we felt the need to give them such thoughtful and concise nicknames. As a baby, Bobble (otherwise known as Esme) would flail her limbs and head all over the place as though she’d been given a major sugar hit. We assumed that she was just a really active baby until we noticed that Yoda (Maelle) was eerily quiet and focused: clearly, she was manipulating Bobble’s movements using The Force.

The twins try to control me using only basic hand motions

Now that they are 2.5 years old, both twins have gained full control of their limbs, and have learned to use The Force in less conspicuous ways, such as helping Elderly Math Geeks (ie: Todd, and their father Joel) design water features out of old pipes, and using their oversized brains to learn both of Canada’s official languages. I take comfort in the fact that they still can’t speak Pig Latin, so at least I’ll have some party tricks to impress them with when they’re older. 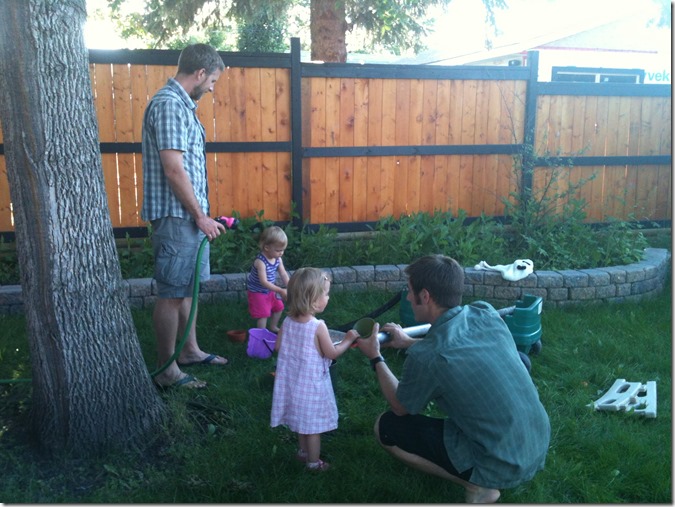 The twins instruct the Elderly Math Geeks on proper hose and pipe placement. 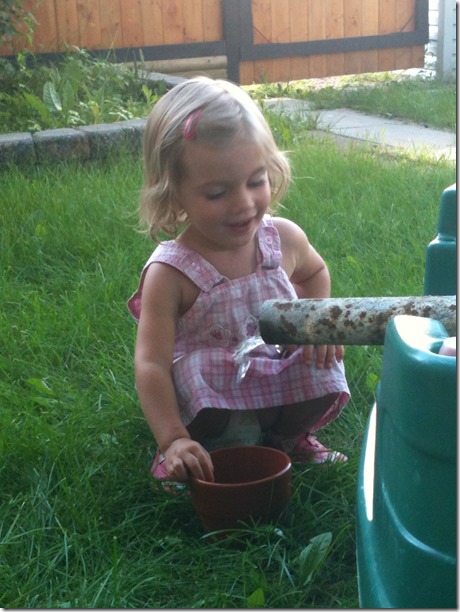 “Ahh. My strategic instruction paid off.”

3. And finally, we have a whole litter of kittens. Todd and his two buddies Mark and Andy are basically Tweedle-dee, Tweedle-dum, and Tweedle-dumber, except that Mark and Andy hopped on the procreation train before Todd did, and cranked out two kids each before Todd could even procure his first. 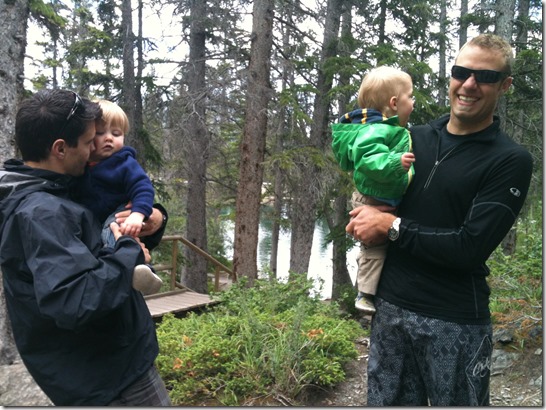 We got to spend a weekend with the Tweedles and their wives and kids, which gave us plenty of time to hike, catch up on life, and have multiple philosophical discussions with their 3 year old daughters, Anna and Emily. 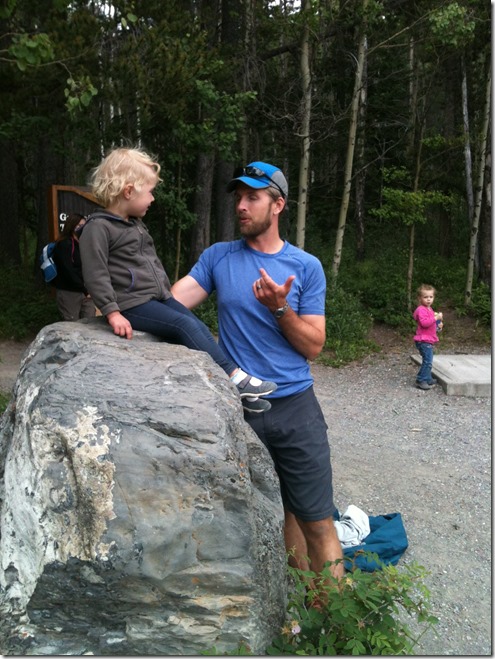 Todd and Emily debate that age old question: What flavour is the colour red?

We learned that a 3km hike with 4 children is an epic endeavour, and requires numerous chocolate bribes and rest stops to throw rocks. However, I’ve never had adult hiking buddies pick flowers for me; or ask if the dog walking toward us on the trail is a bear; or refer to my husband as “That boy,” so I’m calling it a winner. 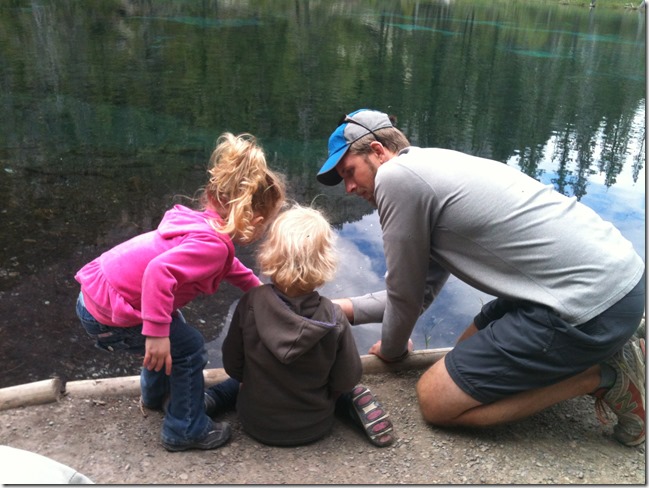 I got to hang out with some additional awesome bobbleheads after Todd left, but I have to cut this post off somewhere. Before I sign off, though, let me just reassure you that amidst all the hangouts with our friends’ kiddies, I didn’t neglect my own wee bairn. Nope. Bannock got plenty of high quality food:

Enjoy it while it lasts, little Bannock, cuz after you’re born, no fast food will ever touch your lips.

And heaps of rest: 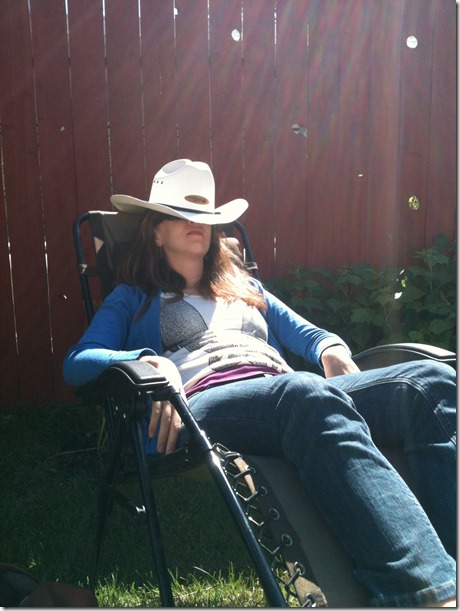 And one last photo for all of you who have bugged me for photos of the bump: rest assured, it is growing. 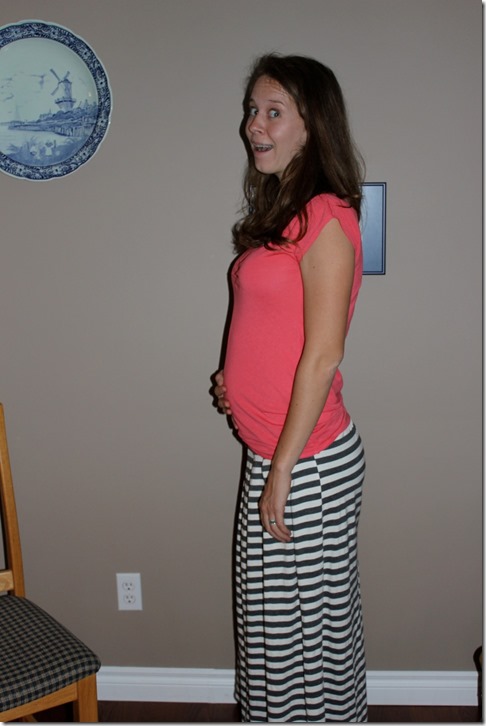 Photo courtesy of my Aunt Jeanette. She is a Dutch Oma, so if you ever bump into her, ask her to make you some Butter Beef.