The school year officially ended on Friday last week. What a beautiful, beautiful day. Overall, I’ve enjoyed subbing this year, but it was time for it to end. The general feeling hanging in the air at school was sort of like a tasty dinner that turns into revolting leftovers when forgotten in the back of the fridge for a week – something good that is way past its prime. Or that relationship that you know you should end, but you just can’t quite find the courage to do it. Or that moment before you finally cut the baby curls off your not-so-little boy. A line from Handel’s Messiah kept running through my head: ‘”Rejoice! Rejoice! Rejoi-oi-oi-oi-oice greatly!”

Before the year was officially over, though, I got to enjoy the delights of a student/teacher talent show. The whole school, including the three-year-olds, crowded into the school gym to enjoy a little light entertainment for no fewer than two hours. In the grand scheme of things, two hours is pretty short, but when you are watching angsty teenagers perform Thai love songs, it can feel like an eternity. Fortunately, there were a few dance acts that spiced up the show. Unfortunately, several of these involved ten-year-old girls shaking their booty to songs about “gettin’ it down on the floor.” In yet another sign (other than the exploding expanding torso) that motherhood is imminent, my immediate response was to mutter ‘overmydeadbodywillanychildofmineEVERdancelikethat.” At least the three-year-olds were entertained.

I love this photo. Everything from the “Done” sign, to the dancing three-year-olds, to the awkward rapping.

The end of the year wasn’t all good, though. There are a bunch of teachers who won’t be coming back next year, and it was sad to see them go (you will be missed!). There was a big staff dinner during the last week of school, and it included a tribute to those who were leaving. The tribute was a karaoke rap song about people dying by Puff Daddy (or whatever his name is now), and included a rewritten verse for every single one of the EIGHTEEN teachers who were leaving. I got to rewrite a verse for one of the teachers, and let me just say that I have a new respect for rappers and the sheer volume of words they manage to spew. My verse was bad enough, but when compounded by a factor of eighteen, it was sheer carnage. One real highlight of the evening for me was the opportunity to wear maternity pants (read: elastic waistband) while hitting the buffet. I don’t care if you’re pregnant or not, or even if you’re a woman or not: you need to wear a pair of these next time you go to a buffet. I promise you won’t regret it. 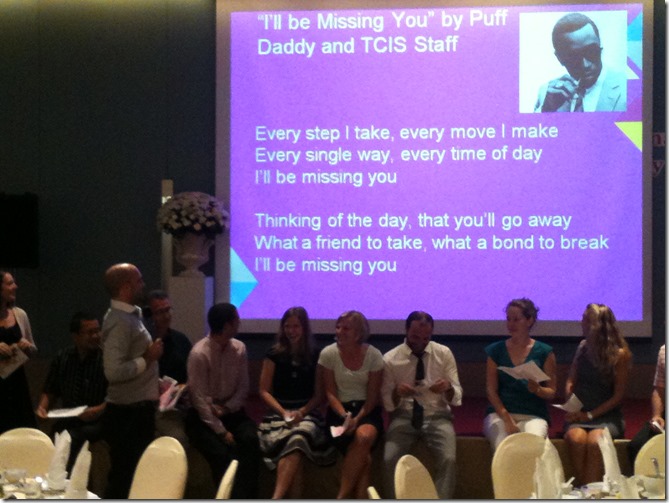 This picture contains less than half the people who were *attempting* to rap.

Todd and I decided to celebrate again on the weekend by doing one of our favourite things – namely, binge eating Indian food. We hauled across town to a restaurant in the swanky Chit Lom area, and dove into a few old standbys – Chicken Tikka, Aloo Gobhi, and Saag Paneer. It was beautiful. Todd says that as soon as the chai touched his lips, he could feel the stress of the year melting away. Never underestimate the healing effects of fat and spice. 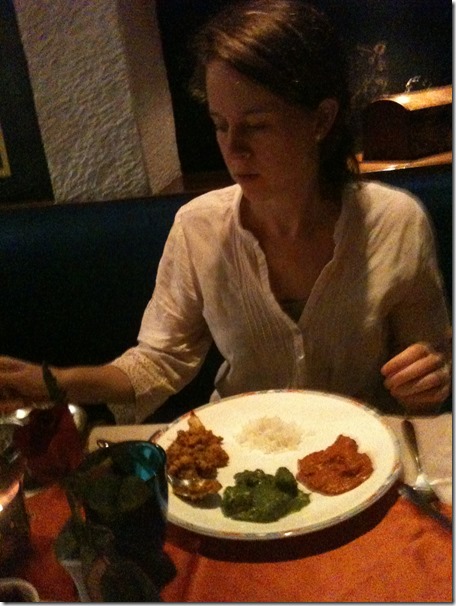 I couldn’t even hold still for a photo. 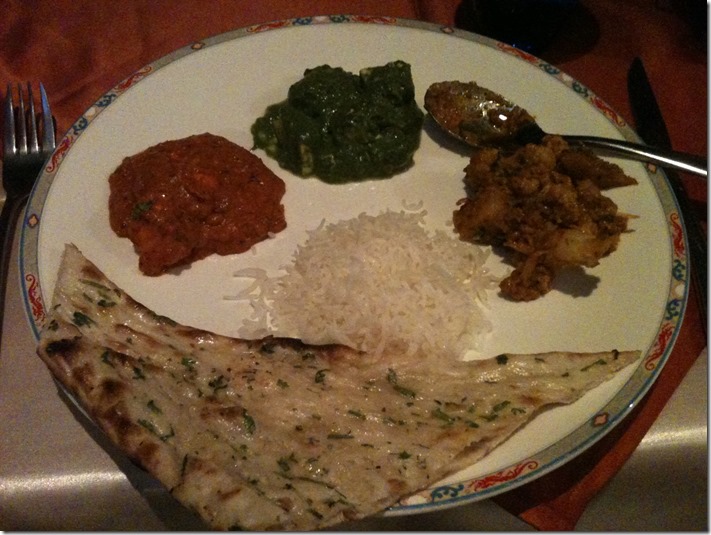 Notice the ghee glistening on every dish…

And that’s it. Hard to believe that our first (school) year in Thailand is already over. Definitely a time for reflection, pontification, and remembrance. But mostly rejoi-oi-oi-oi-oi-oicing!

Well first of all, let me thank you all for the congratulations. It truly warmed the cockles of my heart. Nothing, however, can quite top the reaction of the 5 year olds I subbed for the other day: when they found out that I was with child, one of the students dove headfirst at my belly and kissed it. Several other students settled for a good belly grope, and then spent the rest of the class pointing at my midsection and exclaiming “Look! It’s a little baby! It’s soooo cute!” Not sure how they would react if they could see what my 15 week fetus actually looks like – even as its mother, I can’t honestly say it has reached the ‘cute’ phase just yet.

(This sounds like a tangent but it’s not) Thais love nicknames, and pretty much everyone has one – I’m guessing that this is to simultaneously circumvent their incredibly long names (ie: Nasigorengporn) as well as to channel qualities that they particularly admire: for example, Champion, Win, Best, Bakery. In order to make our child culturally acceptable, we have already chosen a nickname for it: Bannock. The name reflects our Canadian roots (for the uninitiated, bannock is a First Nations quickbread), channels Todd’s obsession with voyageurs, and falls within the acceptable 2-syllable standard for Thai nicknames. Certain members of our family are nervous that the child will be called Bannock for the rest of its life, but we see that as a bonus more than anything.

Ok. Enough about bread, quick or otherwise. On with the brides! On Saturday, we were lucky enough to attend the wedding of Te and View (note the Thai nicknames), two of our friends from church. Here’s a sample of the conversation I had with View (the bride) one week ago:

View: “Congratulations on your pregnancy!”

View: “I have some good news, too: I’m getting married!”

I have never met anyone who pulled a wedding together in one week, but it magically came together. It was a small gathering, with an evening ceremony in the garden of a hotel. The bride and groom were adorable, and alternated laughing and crying throughout the service. As usual, my photography skills were in fine form, and this is the best photo I have of the ceremony:

After the ceremony, there were plenty of photo opportunities. Sometimes I forget how massive I appear in this culture, but every now and then, I get a friendly reminder. Wearing a dress that hits the prego-ness in all the wrong places doesn’t help my cause.

What every wedding needs: a couple of large farangs to make the bride look even more cute and delicate.

The following day, we had another cause for celebration: we finally bought bicycles. We have been talking about buying bikes since we set foot in Thailand, and it took us merely a year to figure it out. We kept tossing around different ideas: “Let’s get folding bikes! Let’s get mountain bikes! Let’s get village bikes! Let’s buy pieces-of-junk-from-the-grocery-store bikes!” In the meantime, our biking souls shrivelled. Todd finally decided that enough was enough, and started checking Craigslist religiously. For a long time, he found nothing but uber expensive top-of-the-line bikes and pieces-of-junk-from-the-grocery-store. When he finally found an ad for decently priced Trek touring bikes, he jumped on it. A couple who had cycled around SE Asia wanted to unload their bikes before they flew home. The only catch was that they wanted to sell them as a pair. Due to my *ahem* knocked-up condition, I wasn’t planning on buying a bike. However, the deal was too good to pass up, so I’m going to putz around on my sweet new bike until the belly makes me too top (gut?) heavy, and then we’ll re-sell it.

Once we handed over the cash, we realized that we were faced with another dilemma: how to get our new joyrides home. We were halfway across the city, and there is no way that we were going to bike all the way home through Bangkok’s insanity. We thought of taking them on the Skytrain, but that still wouldn’t get us close to home. Our only real hope was a jumbo-sized taxi, a rarity in Bangkok. We tried phoning for a big taxi, but were informed that it would have to come all the way from the airport, and would take 1.5 hours to arrive. Todd started hailing random taxis, and asking the drivers if they had friends who drove big taxis, but came up with nothing. Finally, we stood on the side of the road, and begged every taxi that came by to take just one person and one bike, but no one was interested. After 5 or 6 taxis, we were giving up hope, when an angel arrived on the scene. When we asked him to take one bike, he looked at us like we were crazy, and told us that he would take both.

“Just need to remove the engine, and there will be plenty of space.”

Look away, Math Teacher. This isn’t the time for an analysis of spatial dimensions.

He heaved all the tires into his back seat, and stacked the frames in his trunk. Half of both frames were hanging out of the trunk, but this didn’t seem to bother him – he crunched the trunk over the frames and bridged the two-foot gap with the aid of a suspension cord. He informed us that we’d have to avoid the highways, or the bikes would fly out. Not a problem. An hour later, we pulled up in front of our apartment. Taxi drivers often get a bad rap in Bangkok, but this one was a jewel.

The bikes have already been fantastic, and we are kicking ourselves for waiting so long. I’m getting depressed about giving up biking, but then again, there seem to be zero safety standards in this country – once Bannock is born, I can probably just balance him/her on my lap while I cruise through traffic.